In 2005 School Library Journal introduced a monthly interview column called ‘Under Cover.’ The page was to be a short, conversational interview paired with a quirky photo portrait—a friendly introduction to mostly up-and-coming authors and their new books.

The first ‘Under Cover’ subject was a new author named Stephenie Meyer whose book, ‘Twilight,’ was getting a lot of buzz. She was in Arizona, and so I contacted Karen Shell, a great photographer in the area. Karen, Stephenie, and I began an email correspondence about the project and we discussed infusing concept into the portrait. Stephenie nailed it, posing with an apple (from the cover of her novel) and dressed in a sleek vampire-black outfit. 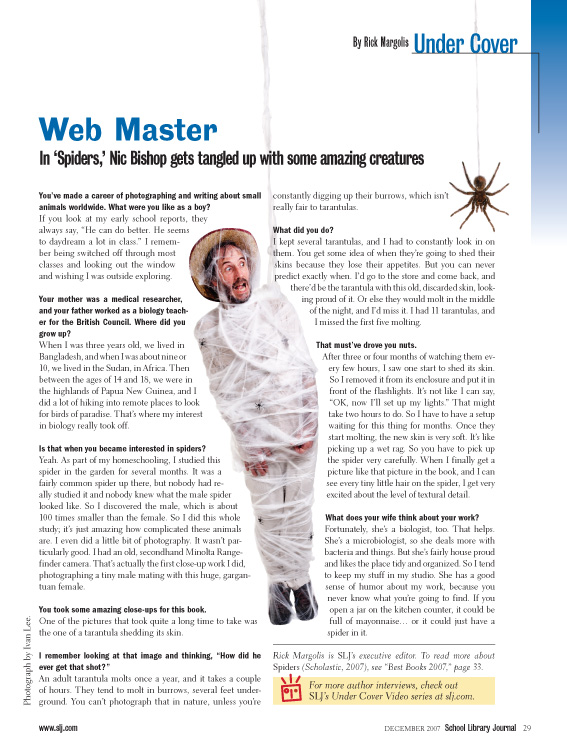 Stephenie Meyer with her debut novel, and a three-book contract already inked, was off to a great start, and so was our ‘Under Cover ‘column. Within a year we had interviewed and photographed Gene Yang, Jonathan Stroud, Catherine Gilbert Murdoch, Emily Gravett, Philip Reeve, and John Green, among others! In 2008  Suzanne Collins appeared on the page being interviewed about her new book, The Hunger Games. After a while it didn’t matter if the author was new or already established—‘Under Cover’ became our monthly format for short, energetic, interviews with authors of great, new books.

What I enjoyed most about these shoots, whether I art directed remotely or in-person, was the collaboration between myself, the author, and the photographer. A great example of this was when  enthusiastic and irrepressible Australian photographers Ivan Lee and Nic Bishop came up with a far-fetched plan involving spider webbing—lots of it—as Nic Bishop’s beautiful new photography book was about spiders. This may be my favorite ‘Under Cover’ photo ever because of Ivan and Nic’s commitment to going so completely over-the-top!