Five years ago, Monica Edinger and Roxanne Feldman of the Dalton School approached School Library Journal with an idea for a “March Madness” of children’s books—basically an online elimination tournament where 16 books are paired up , and after a series of matches, one book emerges victorious . The contest aspect was just a gimmick—a quirky and engaging way for Monica and Roxanne to share and discuss great books. SLJ accepted and the Battle of the Kids’ Books was born.

Rick Margolis, who was the senior editor at the time, was enthused about this new project, and suggested contacting big-name authors as judges. This was a stroke of genius because it ensured many wonderfully entertaining write-ups per battle. The judges in the first year included: Jon Scieszka, Tamora Pierce, John Green, Lois Lowry, Meg Rosoff, Coe Booth, Elisabeth Partridge, and more! A ‘Who’s Who’ of kid lit! And they did not disappoint. Many of the new books Monica and Roxanne chose in 2009 are classics now: The Graveyard Book, The Hunger Games, Octavian Nothing Vol II, We Are the Ship, etc.

I created graphics for the micro site. My plan was to keep them simple as a personal challenge, and also as a practical matter! So I drew anthropomorphized books that were basically rectangles with skinny arms and legs, and I made them in Adobe Illustrator, using a mouse. Here, at right,  is the first BoB logo from 2009.

And although the artwork has gotten more elaborate from year to year, they’re ultimately still the same rectangles with appendages. 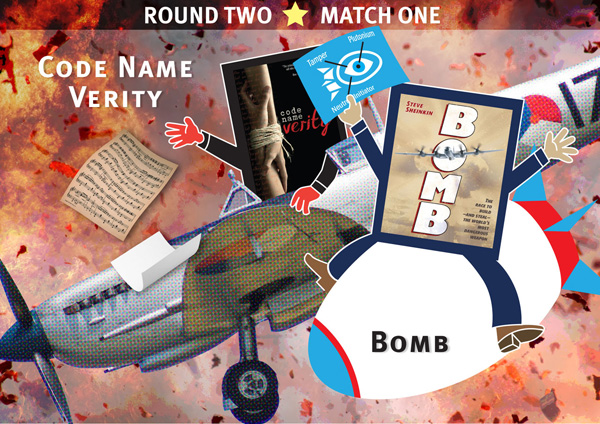 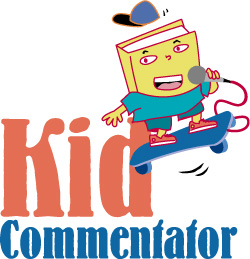