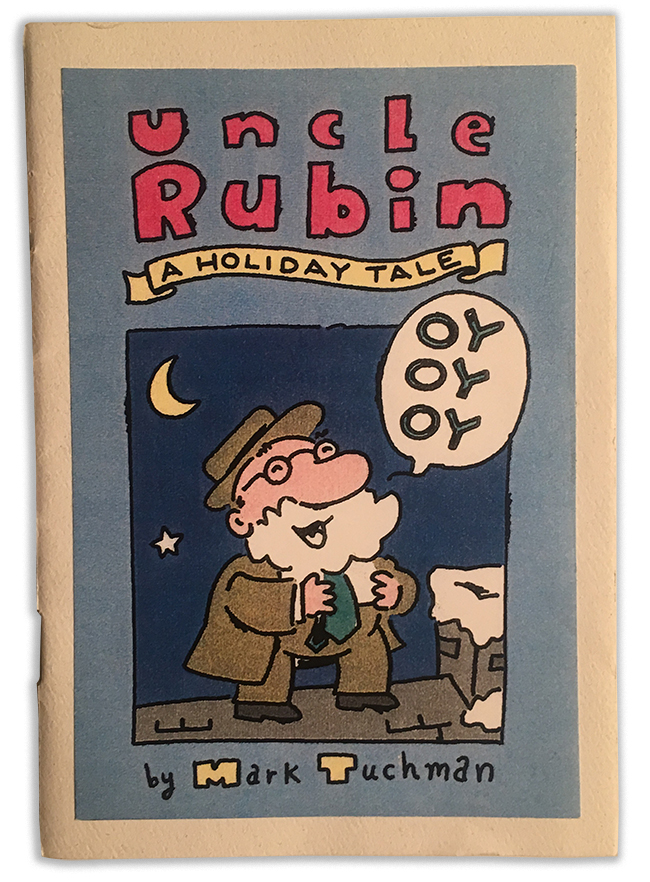 A couple of years ago I resolved to finally develop a picture book concept I had been sitting on since 1992.

It all started out as a Hanukkah/Christmas holiday card. As a Jewish New Yorker who had recently moved to Colorado, I guess it is not entirely surprising that my holiday greeting was a Jewish spin on the Santa Claus myth.

I drew the pictures by hand, and then used my state-of-the-art Mac IIcx (16Mhz engine, 40 MB harddrive!) to prepare the files in Quark Xpress 2.12, only to print them out, make copies at the local copy shop, cut, score, fold, staple, and glue down the full-color cover!

The booklet was a hit among the roughly 60 friends and family who received it. I produced a revised version a few years later. A few have since suggested I turn it into a “real” book. But I was too busy with my fledgling illustration business, and there was just no time to take this project to the next level. 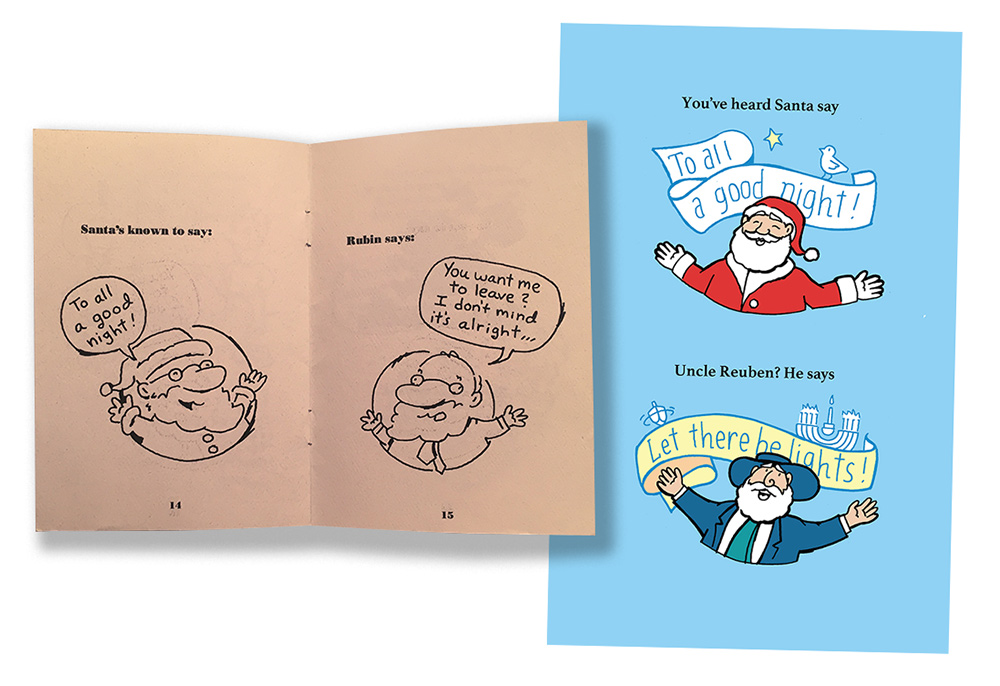 A few short years later, I moved back to New York City, found a salaried job, got married, had children—basically life moved along. I worked on a few independent creative projects during these years, but not Uncle Rubin. A couple of years ago, it dawned on me: I’ll never have the time if I don’t make the time. So I commandeered my wife’s drafting table (thanks Michelle) and got to work.

The drawings in the original booklet were simple as the page size was small. There was minimal background and little detail. I needed new drawings that would fill the larger format. Also, the text needed to be refined to make Reuben (new spelling) a more positive character. For instance in the first version he was a bit of a martyr. See before and after (right). 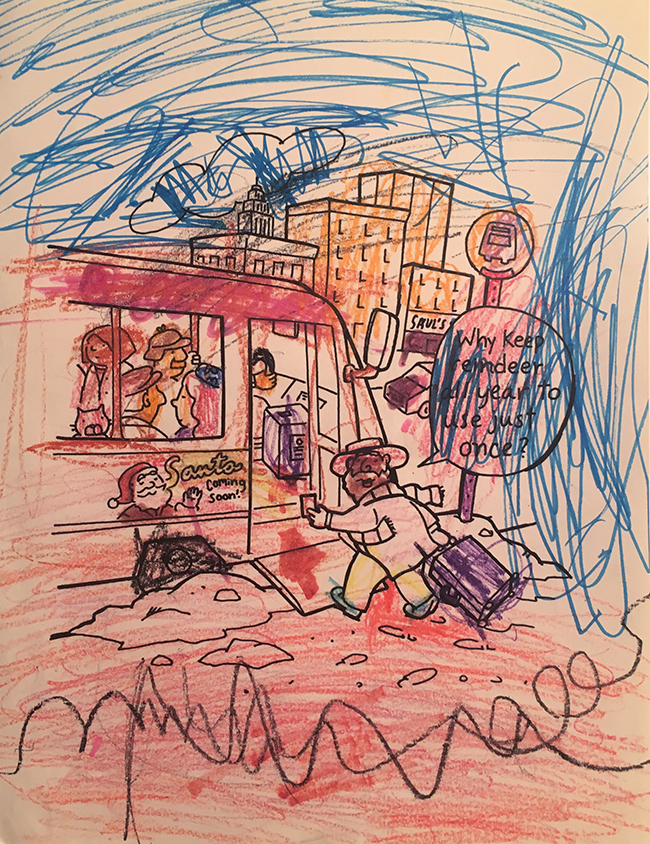 Knowing that this new version of Uncle Reuben would likely be read by people who did not know me personally, made me think more carefully about Reuben as a character. Back in 1992, I didn’t think too much about “cultural sensitivity” when it came to self-deprecating humor about my own cultural background and experiences. My goal was now to find that sweet spot where cultural distinctions are warmly parodied without feeding into negative stereotypes.

With three young children and a demanding day job, I had to find time to work in between the cracks—late nights, weekends. Occasionally my children would embellish my work:

Once a new rough draft of the entire book was in place, I finally felt I had a solid foothold in the project. Some of the sketches and wording weren’t quite right at this point, but I had so much time to mull it over and try out other options during the time I was inking and coloring the other pages. I’m not the kind of illustrator who strikes gold on the first pass. I patiently work my way through version after version. So I have dozens of sketches for each page in the book. Here’s an example of a page where I was working out the verse (in a secret chicken-scratch language) and images, with the final pages next to it:

Here are some of the many incarnations of the cover: 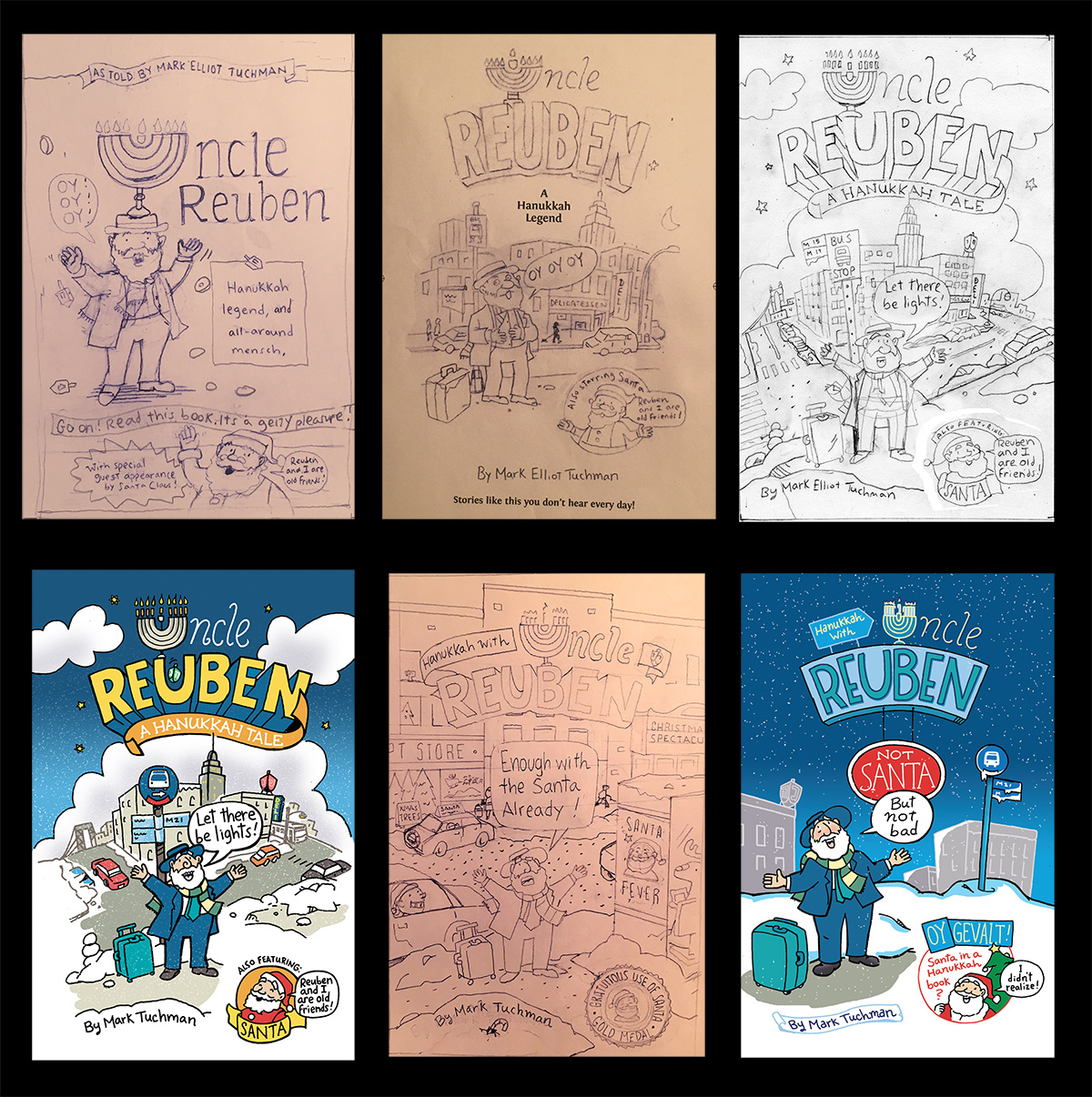 The final art was drawn by hand with felt tip markers, scanned in, colored in Photoshop CS3, and placed in InDesign CS3.

I am grateful for my friends who helped me along the way with suggestions and critiques of the book. They had a major impact on the final product including the name of the book, the first and last pages, and, hmmm, everything in-between. Gee, thanks guys! They are thanked by name on the copyright page.

When the work was 99.99% done I registered for a copyright, and purchased ISBNs. I invested in Adobe Creative Cloud, and with InDesign CC was able to generate a mostly-error-free EPUB file. With the help of tutorials (a tip of the kippa to Anne-Marie Concepcion—the Julia Child of InDesign) I was able to troubleshoot the errors that were causing the file to be rejected by Apple’s iBook Store.

Overall I was surprised and delighted to see how quickly I went from deciding I was ready to roll, to having a book in the Apple iBook Store. How cool after all my efforts to see my book on the iTunes page! 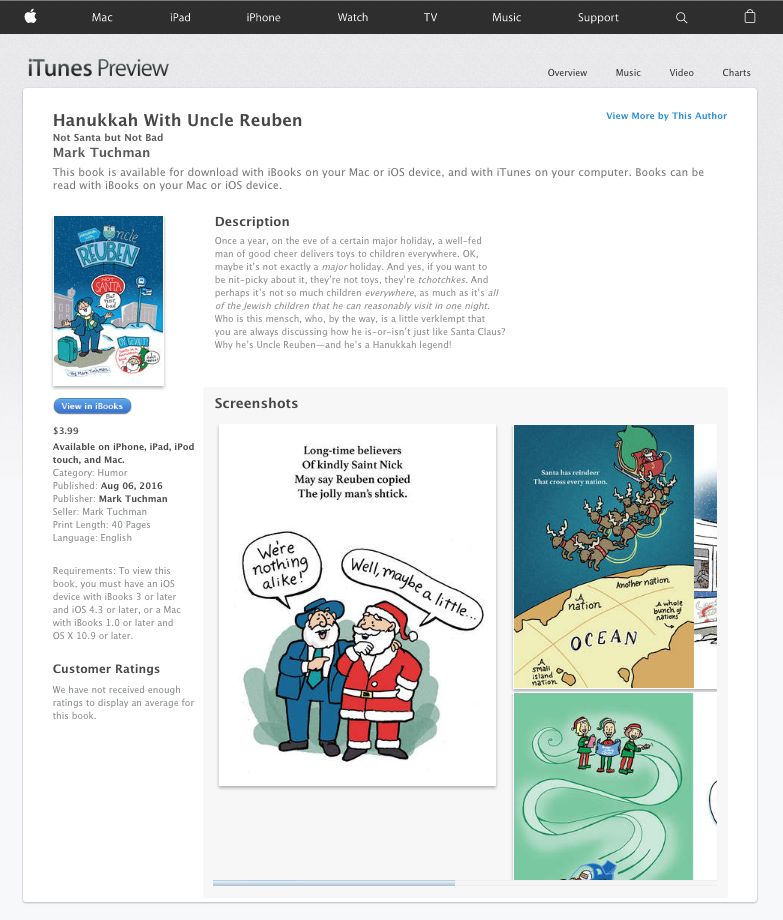 I chose to self-publish because of my eagerness to get the book out there fast after waiting 23 years! Of course self-publishing is no easy road, but with the changing book publishing industry and advancements in technology, now is a pretty good time to try. I love to learn new skills and there are many to learn as I work towards producing and promoting this book. Of course if there is a publisher or agent out there who likes what they see and wants to convince me to leave publishing to the professionals, I am all ears!

What’s next? Plenty: A web site for the book; various publicity ideas; producing a print version of Uncle Reuben; etc. I do not expect to be one of those people with cartons of books in their car trunk or in their garage. This is because I don’t own a car and live in an apartment. So, I guess I have no choice but to move product!

I’ll report back to you here once I get to that next level! In the meantime you can find Hanukkah With Uncle Reuben: Not Santa but Not Bad at the iBook Store.

Update: It’s been twelve weeks since this post and so much has happened. The print book is available on Amazon and in select bookstores. And you can read all about it at unclereuben.com!